So it’s high time to get back into the madness that is DS106. This term, the course is “headless,” no one person is in charge, there’s no one prof, it’s a classroom without teachers except without a classroom too: just the wisdom, expertise and generosity of the members of the ds106 community, old and new. So here then is my first assignment, a bumper for DS106Radio. I played with an old clip about living authentically from My Dinner with Andre and the end of a track from the Run the Jewels album by Killer Mike and El-P and added a voiceover at the end. It took me a while to get the effects in Audacity to do what I thought I’d want to do but since I don’t really yet know what all of them do, I took my chances and am pretty happy with the result.

As many of our readers know, this is a time of transition for us at thisevilempire — we’ve left the once promised land of New Jersey and moved back to Caifornia after almost 20 years on the East Coast. We left with nothing but dreams and two suitcases and returned this past weekend with two children and several advanced degrees between us. On the occasion of the big move, I present something from the Vaults: a video I made just before we moved into our house in the burbs in 2007. Jonah was two and a half and Eli was still cooking. After over 6 years and lots of home improvement, house we left this month looked a little different than it did when we moved into it. Enjoy.

One more for the DS106 GIF-Fest. Here’s a 3D printer printing an orange robot Santa Claus. I made this from the live web cam feed of one of the machines we have at work. The URL is baruch.cuny.edu/3dprintercam.

It’s the first ever DS106 Gif-Fest. Here’s my first salvo. Pigs in Spaaaaaace!!

After the few very indirect references to Virginia Slims cigarettes in the season finale of Mad Men, I was inspired to search for the now famous 1969 “You’ve Come a Long Way, Baby” TV commercial. After finding a number of Virginia Slims ads created for the Australian market in the late 60s on Archive.org, I came across this one:

This particular cigarette commercial, this petty bit of TV ephemera that playfully yet insidiously co-opts and trivializes the feminist movement, is actually quite special to me and my family. The angry man at the gazebo in the first vignette in the ad is my late father-in-law, Jeremiah Morris, who had a long career in theater and television as both an actor and a director until his death in 2005. A framed still from the commercial showing Jeremiah in a bowler hat scolding the young woman for smoking hung proudly in my in-laws’ house for years and the ad was stuff of Morris family legend though neither Jennie nor I had ever seen it until now. Family lore also had it that Jerry’s Virginia Slims ad was the very last cigarette commercial to air on network television, on Johnny Carson’s Tonight Show at 11:59pm on January 1, 1971, according to TV Party. I have not yet been able to confirm this.

According to lots of sources, that last cigarette ad featured Hill Street Blues actress Veronica Hamel (crossword puzzle freaks will recognize that name from clues and answers) but the model in Jerry’s ad doesn’t really look like her. In fact, according to this site, it appears that the last cigarette ad to run was among those in the You’ve Come a Long Way Baby campaign, but not the one featuring Jerry.

After I tweeted the link to the ad, my DS106 compadre, the great Scott Lockman, who teaches new media and radio broadcasting courses in Tokyo, went to work creating an animated GIF from the ad. Scott’s GIF is wearable in Second Life as a broach — this means that, for a small fee in in-game currency, you can purchase the broach from Scott and adorn your avatar with this piece of animated jewelry. You can listen to Scott discussing and demonstrating the Jerry broach here.

Not to be outdone, I also created an animated GIF of the last bits of the gazebo sequence:

And now Jerry runs out from behind the gazebo, chasing that poor woman ad infinitum, endlessly calling our attention to the cultural artifact that this commercial is and mesmerizing us all the while.

All that said, I am struck by on the just how easy it was to find this ad that basically vanished into the ether after that last airing in 1971, a few months before I was born. And now here it is. You can even download it and remix it or make animated GIFs or broaches or whatever. As Jim noted in this tweet, Jerry, who died when Jonah was just a year and a half old, is that much more real and present for my kids — in a very real sense, I’ve interacted with his legacy in a way that was unimaginable just a few years ago.

I’m also fascinated by how a simple activity of deriving something simple like an animated GIF of a few frames from an artifact of cultural history as Scott and I did can be, potentially, an act of critical cultural preservation. In taking that bit of the ad and engaging it in a new way, I created an opportunity to reflect on its historical context and cultural significance, not to mention the sentimental value it holds for me. There’s great potential here for us digital pedagogues. Consider this as a possible assignment: take a bit of classic nostalgia or a video that is somehow culturally and historically significant, create an animated GIF from it and reflect on the relationship of the GIF to the original and on the process of creating the GIF, particularly on the choices you’ve made in making it.

There’s more to be said about this and I am looking forward to thinking it through.

UPDATE (5/14): The video of Jerry’s commercial is no longer on YouTube on copyright grounds. It’s a good thing we made those GIFs. That’s some cultural preservation right there.

After some discussion about whether a certain conference has “jumped the shark,” I was inspired to create an animated GIF of Fonzie’s legendary water skiing jump over an ostensibly man-eating shark in a 1977 episode of Happy Days, which, to some observers, signaled the beginning of the venerable sit-com’s steady decline and which inspired the very useful notion of “jumping the shark.” Here’s my first stab:

This is a big file, around 5MBs so not necessarily all that useful and it’s long. I felt the shark was essential and I didn’t really want to re-edit Happy Days so I included a fairly long portion of the jump sequence. In playing around with individual shots from the water skiing scene, I came up with this version where Fonzie skis and skis on forever, unconcerned with sharks or his show’s hearty embrace of the absurd and implausible, like the idea that someone “cool” would water-ski in a bomber jacket:

After I shared these on Twitter, the inimitable Scott Leslie, with whom I had the aforementioned discussion about that certain conference (which I’m not convicted has shark-jumped, fwiw), created two shorter versions from my original:

So there you have it: an iconic TV moment ad infinitum and some collaborative GIF-ing. DS106 4 life, bucko!

Michael Branson Smith added this to the mix: “Megaladon eats the idiom . . . never ‘jump the shark!'”

The Journey of a Piece of Sushi a Conveyor Belt

What part of the title did you not understand? Sushi on a conveyor belt at Kaiten East Sushi, 3rd Ave and 27th St., NYC. Got about a minute before my phone fell. The sushi goes around on a conveyor belt on different colored plates. Each color plate costs a certain amount (white, $1.50; pink, $1.75; green, $2.00, &c., &c.) Take what you want and stack the plates. At the end of the meal, the waitstaff tallies the different colored plates and calculates the bill. In Japan, this is called kuru kuru sushi. Pretty cool. And delicious.

Above is my first take on Alan Levine’s great “Make The Untranslatable Understood” DS106 assignment:

Use the Random Words with No English Translation tool (http://lab.cogdogblog.com/nowords/) to generate a word that could be better understood with a photo or image. Find a creative commons image or make your own, and include the word somehow in the image (using a desktop photo editor or web tool like Aviary or PicNIk). Then share it with someone and ask if it makes sense.

Indonesian in origin, “jayus” has made its way into  Malaysian, Filipino, Tagalog and now English.

(Image credit: TimmyGUNZ. I originally wanted to use an image of the real Fozzie Bear but could not find a suitable CC licensed one.) 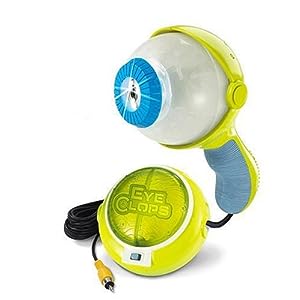 A few years ago, a friend gave Jonah what I think is the coolest toy ever: an Eyeclops Bionic Eye, which is a hand-held multi-zoom LED-lit microscope that plugs into any TV that has a composite video jack (the yellow one.) (Here’s a video demo of the model that we have.) I’ve always wanted to find a way to grab images from the Eyeclops and share them but that is impossible out-of-the-box without additional equipment though supposedly a later version adds this functionality. Now I am finally able to connect the Eyeclops to my computer as I picked up a USB video capture dongle (mine’s made by Roxio) that allows you to hook up your VCR or other analog video source to a computer and digitize video from VHS or Hi8 tapes (it should work for audio cassette tapes and vinyl records as well.) Using software called VideoGlide, I was able to take some snapshots and create the pictures below. The full version of VideoGlide costs $30 but the limited free demo of the tool allows you to use it for 10 minutes max at a time, which is plenty of time to produce some nifty images. I couldn’t find any truly free video digitizer software for the Mac but there seem to be a number of good options for PC users. Now that I can digitize its output, I’m really looking forward to revisiting the Eyeclops to see what kind of stuff the kids and I could do with it. There’s some potential here for ds106 too. Maybe we’ll produce the first ds106 microscopic digital story.

VideoGlide puts out images at 640×480. Click on the images below to see the full size version.

My wedding band at 100x magnification.

Ink on a Post-It note at 100x magnification.

Mouth of a Russian matryoshka doll at 400x

Detail from same at 100x

Printing on a plastic pen at 100x

A little animated GIF fun with some footage of Jim Groom from the #ds106radio NYC jam this past Thursday night:

And some great photos from that night by my CUNY colleague, Michael Branson Smith.

Here’s Luke Waltzer’s brilliant reflection on the DIY Radio session at Baruch the night before that provided the occasion to get together and play music loud. Really loud.

Oh and, this just in: audio archives and reflections by Giulia Forsythe. Rock!